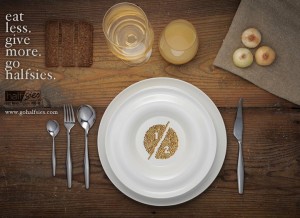 With 925 million undernourished people in the world, hunger is the world’s number one health threat. Contrast this with the fact that approximately 1.3 billion tons of food is lost (at production, harvest, post-harvest and processing phases) or wasted every year worldwide. A new initiative that will launch this Spring in Austin, TX called “Halfsies” seeks to address these concurrent problems by offering restaurant-goers a choice that would provide “healthier meal portions while reducing food waste and supporting the fight against hunger and poverty.”

Over the past several decades, restaurant portion sizes have increased dramatically, meaning diners often overeat, bring leftovers home or the restaurant tosses their uneaten food into the trash. According to Jonathan Bloom, author of American Wasteland and founder of the blog wastedfood.com, Americans waste about 40 percent of all food produced, amounting to roughly $100 billion in costs each year. Food waste not only has significant economic implications, but also contributes to energy loss (i.e. fossil fuel spent on food growth, processing, transport, and refrigeration).

Participating restaurants will place the “Halfsies” icon next to menu items available as a half-portion. Customers selecting a “Halfsies” meal will pay full price but only receive half the amount of food. A percentage of the meal price will be donated to non-profit partner organizations working domestically and internationally on food insecurity, hunger and other related issues. Sixty percent of the funds generated will be invested in domestic
organizations and thirty percent will be allocated to international organizations. The remaining 10% will be used to cover administrative and operating costs of this innovative anti-hunger initiative.

A unique feature of this program is how it tackles multiple food and nutrition-related problems simultaneously. By providing smaller food portions to customers, it is promoting healthier eating patterns for consumers and limiting the amount of food that is wasted at restaurants. During the current economic recession, when 1 out of 6 people in the United States are experiencing food insecurity and with rising rates of obesity (two thirds of American adults and one third of American children are overweight or obese), efforts to reduce excess food consumption are particularly needed as are initiatives to provide resources for low income families. When McDonald’s first opened in 1955, a hamburger weighed only 1.6 ounces; now, its largest hamburger weighs 8 ounces – an increase of 500 percent!

By making the choice to go “Halfsies”, participants in the program are not only making a positive health impact in their own lives by eating less, but also become active participants in efforts to reduce hunger in their community and the world.

To learn more or about how to get involved, visit http://www.gohalfsies.com or email
gohalfsies@gmail.com