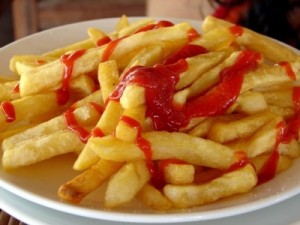 French fries and pizza don’t make a healthy meal, especially not for America’s school children, one out of three of whom are overweight or obese. Yet Congress chose to save these junk foods on school lunch menus — in effect, putting profits of a narrow part of the food industry ahead of our country’s future health.

Congress’ final version of a major spending bill has undermined a
long-awaited U.S. Department of Agriculture (USDA) plan for improving school
food. The USDA’s original plan was rooted firmly in nutrition science — the
first update that our school lunch guidelines have had in 15 years — and it could
have helped this country fight the twin epidemics of obesity and type 2
diabetes. Congress’ meddling, however, was rooted purely in food politics:
Frozen pizza makers, potato growers and other food industry players spent millions
of dollars lobbying legislators about the school lunch changes.

The USDA’s plan would have limited the amount of potatoes and
starchy vegetables that school lunch rooms could serve to one cup a week.
Schools would replace potatoes and fries with a variety of health-promoting
vegetables, especially the dark green and orange types that most of our kids
don’t eat often enough — broccoli, spinach, carrots and the like. The plan
would also have closed a loophole that allowed a scant 2 tablespoon serving of
tomato paste to “count” toward the school lunch vegetable
requirements. Bumping the tomato paste serving from 2 tablespoons to 1/2 cup
would have meant that a pizza slice, with its dab of tomato sauce, could no
longer be called a vegetable. These changes were part of a broad revamp of federally-funded school meal programs, based on recommendations from a year-long review by a
committee of nutrition experts convened by the Institute of Medicine of the
National Academy of Sciences.

Congress’s support of unlimited feeding of potatoes to children is
particularly damaging to their health. At present, potatoes make up about 30
percent of the vegetables that kids eat each day, but unlike other vegetables
they undermine rather than promote health. Potatoes are very high in
carbohydrate — specifically, the type of carbohydrate that is rapidly digested
by the body. Eating large quantities of potatoes and similar “fast”
carbohydrates leads to spikes and dips in blood sugar and insulin, which in
turn can lead people to feel hungry again shortly after finishing a meal — a
perfect recipe for overeating. Long term, people who eat diets high in potatoes
and other fast-digested, carbohydrate-rich foods have a higher risk of obesity,
diabetes and heart disease.

Potatoes, of course, do contain vitamin C and potassium, among
other nutrients. But potatoes aren’t the only way for our children to get these
important nutrients, and they’re hardly the best: A cup of broccoli has nearly
nine times as much vitamin C as a cup of potato, and white beans have about twice
as much potassium. Yet a cup of potatoes has a similar effect on blood sugar as
a 12-oz can of Coca Cola. Clearly, there’s no reason for children to pay this
steep metabolic price for vitamins and minerals that can easily get from other
foods.

Given the high amounts of rapidly-absorbed carbohydrate in
potatoes, it should be no surprise that they increase the risk of weight gain,
obesity and diabetes. In recent analyses conducted at Harvard School of Public
Health, we tracked 120,000 men and women in three large studies for up to 20
years to evaluate the relation of small changes in food choices to weight gain.
In all three studies, people who increased their potato consumption gained more
weight. French fries were a particular culprit for weight gain, linked to a
gain of an extra 3.4 pounds every four years. But even baked or mashed potatoes
were associated with extra weight gain. People who cut back on these foods
gained less weight, as did people who ate more of other vegetables. In an
earlier report, we found that greater consumption of potatoes was associated
with an elevated incidence of type 2 diabetes; replacing one serving of whole
grains per day with potatoes was associated with a 30 percent increase in risk.
These are all reasons why potatoes should be considered an undesirable form of
starch in diets and why we don’t count them as vegetables on Harvard’s new Healthy
Eating Plate. There were very sound reasons for the Institute of Medicine
to recommend limiting consumption of potatoes and replacing these with healthy
vegetables on school menus.

In addition to ensuring that school menus continue to fatten up
our children and add to their future risk of diabetes, Congress added language
that forces the USDA to keep the current portion sizes on tomato products so
that pizza slices remain a vegetable. By comparison, the Reagan
administration’s infamous (and ultimately, unsuccessful) move to have ketchup
counted as a vegetable seems like minor tinkering. Congress also stalled the
USDA’s plans to reduce sodium in school lunch until the USDA reviews more
research on “the relationship of sodium reductions to human health.”

However, there is no reason for delay, because the vast literature
on sodium and health has already been reviewed recently by the American Heart
Association and the Institute of Medicine. Despite what the salt industry would
have you believe, there is no reason to hold back on reducing the high amounts
of sodium in kids’ meals: More than 90 percent of school children are getting
more than recommended amounts of sodium each day. Strong evidence documents
that diets high in sodium increase the risk of high blood pressure, even in
youth, and thus increase the risk of heart disease later in life.

Unfortunately, Congress imbedded their changes to the school lunch
plan in a broad spending bill that President Obama could not veto. This is a
short term victory for potato growers and narrow parts of the food industry,
but the losers are our children who will pay in shortened lives and suffering.
In the debate about foods in schools, Senator Collins from potato-growing Maine
argued that our country could not afford the cost of approximately one billion
dollars a year to feed children healthy vegetables instead high-starch foods.
This is amazingly short-sighted, because the costs of the obesity epidemic
already raging in our children’s generation will be many hundreds of billions
of dollars over the coming decades. In reality, we can’t afford a society
burdened with disability at what should be productive ages and ever escalating
medical costs.

This entry was posted in article, blog, homepage-slider, pizza. Bookmark the permalink.