SNAP to Health with Double Up Food Bucks 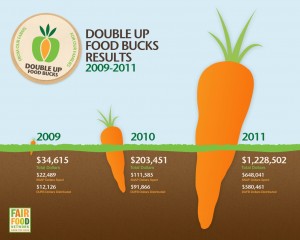 One way to create a healthier food environment for low-income residents of our inner cities and “food deserts” is to increase the amount of SNAP dollars being spent at farmers’ markets – and doing so has the added advantage of also benefitting local farmers and the local economy. This is precisely what our nonprofit Fair Food Network (FFN) is doing with the statewide Double Up Food Bucks (DUFB) program at 55 participating farmers’ markets in Michigan.

In Detroit alone, low-income consumers received $481 million in SNAP benefits in 2010. Of the 75 percent (roughly $361 million) of these benefits redeemed within the city, farmers’ markets received less than $200,000. FFN decided to try a grand experiment: provide monetary incentives to Detroit-area SNAP recipients to encourage them to spend their food assistance dollars at farmers’ markets. Because the healthy food access issue is so acute in Detroit and because the city is home to Eastern Market, the longest-running public farmers’ market in the country, it seemed like a natural place to try an incentive program on a large scale.

Here is how the program works: SNAP shoppers use their benefits at a participating farmers’ market and receive tokens for an equal amount to purchase any Michigan-grown fruit or vegetable from any participating vendor. In effect, we double SNAP recipients’ food dollars, up to $20 per market day. By spending only $20 of SNAP benefits at the farmers’ market, the shopper comes home with $40 worth of healthy, fresh, regionally grown produce.

After seeing the results of the Detroit-based pilot program FFN ran in 2009, George Soros’ Open Society Foundations chose DUFB as one of the three Michigan projects to support under their Special Fund for Poverty Alleviation, with two provisions: that the program expand to statewide over the next three years and that we match dollar for dollar the funds we receive from the foundation. To date, FFN has obtained commitments for matching funds from over 30 local and national foundations and corporations and now has a $6 million project to double the value of SNAP purchases at farmers’ markets throughout the state of Michigan.

In 2010, the program was implemented in 15 markets with great success, and during the 2011 program season, SNAP recipients made 40,147 visits to 54 participating markets to take advantage of FFN’s DUFB program. Shoppers used $687,843 of SNAP benefits and received $620,115 in DUFB matching tokens. Almost a third of these customers were using their SNAP benefits at a farmers’ market for the first time ever, creating an entirely new cadre of shoppers at the markets and supporters of the local food economy as seen in our DUFB video. You can see how the program has grown in the graphic below. In 2012, we plan to be in more than 70 markets statewide, and we have also had interest from organizations around the country asking how to implement DUFB at their area markets.

Strong collaboration among our partners enables us to be successful in raising funds and promoting the program to those who most need the assistance. Including the pilot, 2011 was the third year of the program, and in that year alone Fair Food Network placed $1,307,548 of purchasing power in the hands of low-income shoppers at farmers’ markets and increased the income of farmers who sell directly to consumers at farmers’ markets – definitely a win-win situation!

The DUFB program is undoubtedly one reason why in 2011, SNAP redemptions at farmers’ markets in Michigan ($1,076,611, according to USDA) were greater than in any other Midwestern state by a large multiplier. 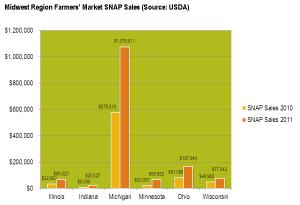 DUFB has demonstrated the feasibility and effectiveness of using incentives to encourage lower income families to purchase healthier food and support the local food economy and farmers, and so far the program is almost exclusively supported by philanthropic dollars. As our food and farm policy is created for the future with the reauthorization of the Farm Bill in 2012, we have an opportunity to provide public funding for this highly successful approach to nutrition and rural economic development.

If you want to learn more about and become engaged with FFN’s policy campaign to “Shrink Food Deserts and Expand Regional Food Systems,” go to the FFN website and sign up to become part of our communications network, so you will be poised to take action with us when the moment comes.