Obesity rates in the United States are at an all-time high. In 2015-2016, 40% of American adults and 19% of American children were obese according to the results of the CDC’s National Health and Nutrition Examination Survey released earlier this month. This means that more Americans than ever before in history are seriously overweight with a body mass index (BMI) equal to or exceeding 30 kg/m2. BMI is calculated by dividing a person’s weight in kilograms by the square of the person’s height in meters. This alarming trend has significant health and economic costs for individuals and for the United States.

The study found that 43% of adults, aged 40-59, were obese, followed by 41% of people aged 60 and older, and 35% of people, aged 20-39. Among youth, 21% of adolescents, aged 12-19, were obese, followed by 18% of children aged 6-11, and 14% of children, aged 2-5. The study noted a significant difference in the prevalence of obesity between racial and ethnic groups. Specifically, Hispanic and Black individuals were found to have higher rates of obesity than those of non-Hispanic White and Asian Americans. These findings were present across all age groups. Black, Asian American, and Hispanic women had a higher prevalence of obesity compared to that of men from these racial groups. However, there were no significant differences in obesity rates observed between non-Hispanic White men and women. (Figure 1). 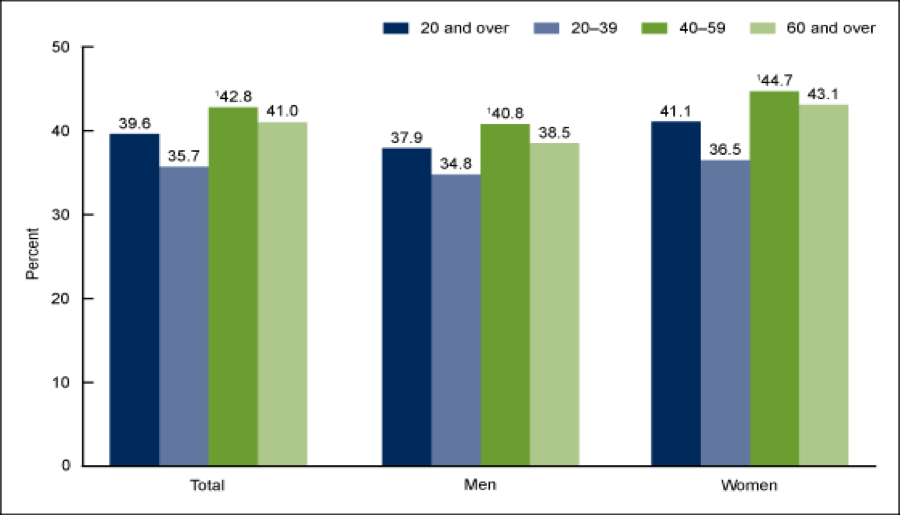 From 1999-2016, obesity rates have increased significantly among both adults and youth (Figure 2). This trend is very concerning given that obesity is linked to increased morbidity and higher rates of premature mortality. For example, obesity is associated with an increased risk of certain cancers, diabetes, cardiovascular disease (CVD), stroke, osteoarthritis, impaired kidney function, infertility, gastroesophageal reflux disease (GERD), and sleep apnea to name just a few conditions. These comorbidities are linked with higher health care costs and more expensive insurance premiums, as well as increased indirect costs, such as lost work productivity, absenteeism, and a decrease in quality-adjusted years of life (QALYs). 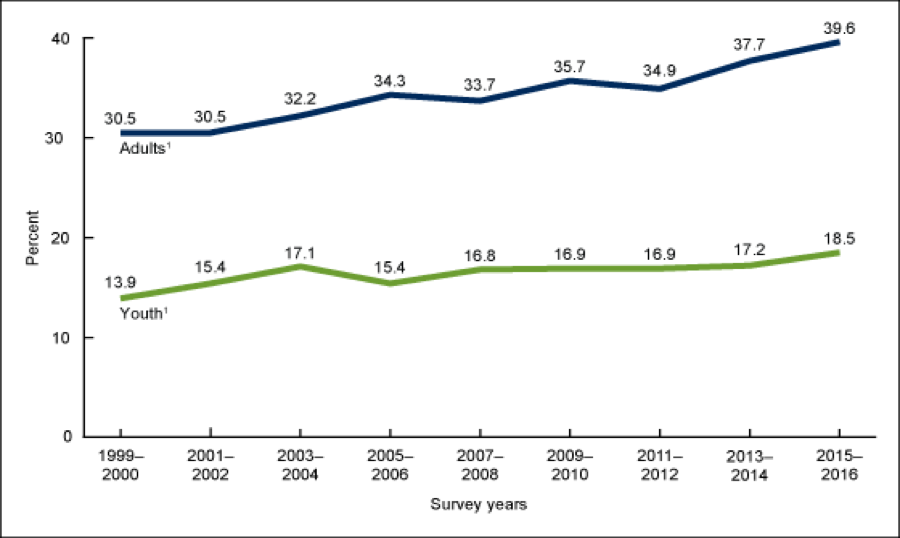 Therefore, intensified efforts are needed to prevent and treat obesity in order to reduce the human and economic costs associated with this condition. Reversing the obesity epidemic requires individual and societal interventions using a “health in all policies” approach.

At the individual level, maintaining a healthy weight; “eating smart” with a diet that aligns with the U.S. Department of Agriculture’s (USDA) MyPlate and Dietary Guidelines for Americans and is rich in fruits, vegetables, vitamins, and protein; regular physical activity; routine weight monitoring; awareness of excessive eating triggers; and practicing stress reduction are important ingredients for a healthier future.

At the community level, local governments must put in place programs to encourage healthy behaviors for their citizens. Communities should offer nutrition education, physical activity interventions, school and workplace wellness programs, stress-reduction initiatives, and other home and community resources. Communities must also do more to increase access to healthy foods in supermarkets, corner stores, schools, and workplaces as well as encourage the establishment of more farmer’s markets.

At the national level, the Federal government should incentivize the food industry to develop and market healthy options for the public. Food marketing of unhealthy products has been a significant factor fueling the obesity epidemic. For example, according to a 2010 study, fast food is the most frequently viewed food advertisement. This type of food marketing is especially harmful for children, given that people form their eating habits at young ages. The Federal government should continue to support programs that educate Americans about healthy eating. Additionally, the Federal government should take actionable steps to expand access to nutritious foods through Federal food assistance programs including SNAP and WIC and provide support for national physical activity campaigns and community based programs.

A significant component of the Affordable Care Act of 2010 was to fuel a prevention revolution and build a culture of health in America by providing  free preventive services in insurance plans with no cost-sharing or deductibles and by establishing the Prevention and Public Health Fund (PPHF) as well as the National Prevention Council. The PPHF goal, with an allocation of $15 billion over its first ten years, was to support expanded and sustained national investment in prevention and public health programs to improve health and help restrain the rate of growth in private and public health care costs.” To date, the PPHF has invested in a broad range of evidence-based activities including community and clinical prevention initiatives; research, surveillance and tracking; public health infrastructure; immunizations and screenings; tobacco prevention; and public health workforce and training. However, the Fund’s allocations have been cut in recent years. Another initiative established by the ACA is the National Prevention Council, chaired by the U.S. Surgeon General,  that includes representatives from 17 agencies across the Federal government as well as state and local policy makers, tribal and territorial governments, private sector partners, philanthropic organizations, families, and individuals to facilitate an integrated strategy to improve health outcomes for Americans. Federal government partnerships, like these, are vital to ensuring that communities and individuals have the resources they need to take positive steps towards a healthier future.

Obesity has proven to be an unrelenting public health problem which demands a “health in all policies” approach — one that mobilizes all sectors of society, including government, the food and restaurant industries, transportation companies, technology experts, the media, public health professionals, engineers, and educators, as well as individuals and families, to develop and implement innovative initiatives that will tip the scales on obesity towards health in the years ahead.

Rear Admiral Susan Blumenthal, M.D., M.P.A. (ret.) is the Public Health Editor of the Huffington Post. She is a Senior Fellow in Health Policy at New America and a Clinical Professor at Tufts and Georgetown University Schools of Medicine. Dr. Blumenthal served for more than 20 years in senior health leadership positions in the Federal government in the Administrations of four U.S. Presidents including as Assistant Surgeon General of the United States, the first Deputy Assistant Secretary of Women’s Health, and as Senior Global Health Advisor in the U.S. Department of Health and Human Services. She also served as a White House Advisor on health. Prior to these positions, Dr. Blumenthal served as Chief of the Behavioral Medicine and Basic Prevention Research Branch and Chair of the Health and Behavior Coordinating Committee at the National Institutes of Health (NIH). She has chaired numerous national and global commissions and conferences and is the author of many scientific publications. Admiral Blumenthal has received numerous awards including honorary doctorates and has been decorated with the highest medals of the U.S. Public Health Service for her pioneering leadership and significant contributions to advancing health in the United States and worldwide. Named by the New York Times, the National Library of Medicine and the Medical Herald as one of the most influential women in medicine, Dr. Blumenthal was named the Health Leader of the Year by the Commissioned Officers Association and as a Rock Star of Science by the Geoffrey Been Foundation.  She is a recipient of the Rosalind Franklin Centennial Life in Discovery Award.

Rachel Gardner currently serves as a Health Policy Fellow at New America in Washington D.C. She graduated from Cornell University in 2017 with a degree in government and plans to attend medical school in the future.