Posted on November 7, 2016 by Mariana Zindel

The U.S. Department of Agriculture (USDA) recently released its annual report on the food security status of American households. The report showed that food insecurity rates decreased in 2015 to 12.7 percent from 14.0 percent in 2014, but they were still higher than pre-recession rates. The USDA defines food insecurityas households that are “uncertain of having, or [are] unable to acquire enough food to meet the needs of all their members because they [have] insufficient money or other resources for food.” Food insecurity is also measured in relation to a household’s economic and social circumstances that result in restricted or unreliable access to adequate food.

U.S. Households with Children by Food Security Status of Adults and Children, 2015

Prior to the Great Recession of 2008, the percentage of households that experienced food insecurity was 11.1 percent but then increased to 14.6 percent during the year that the severe economic downturn occurred, reaching a high of 14.9 percent in 2011. The good news is that as a result of the economic recovery, 7.9 million fewer people struggled to obtain adequate food in 2015 as compared to 2008.

Food Insecurity Fell in 2015 but Remains Above Pre-Recession Levels 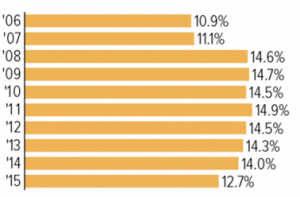 Center on Budget and Policy Priorities, 2016
Percentage of food insecurity in America from 2006 to 2015

Contributing Factors to the Recent Reduction in Food Insecurity

Several factors have contributed to improvements in food security for Americans over the past year. In 2015, low income people in the United States may have experienced benefits of the economic recovery including low overall inflation combined with reduced costs of oil and gas, allowing them to allocate more of their resources to purchase food.

Additionally, American households continued to benefit from social safety net programs in 2015, including the Supplemental Nutrition Assistance Program (SNAP). SNAP is the largest Federal food assistance program with a budget of $74 billion, serving over 45 million Americans, 44% of whom are children. Those individuals enrolled in SNAP in 2015 had food insecurity rates that were 30% lower than eligible non-participants.

Moreover, community eligibility for the Federal school breakfast and lunch meal program provided at no charge increased during the 2015-2016 academic year. About 4,000 more schools in low-income communities participated in this nation-wide program as compared to the previous year, amounting to more than 18,000 schools. About 19.8 million children relied on these free school meals for a significant portion of their daily nutrition. Research demonstrated that the Federal school meals program had a significant impact on children’s well-being by reducing food insecurity, improving consumption of nutritious products, and helping to reduce childhood obesity in this vulnerable population. The provision of school meals also enhanced the overall learning environment by decreasing students’ emotional distress linked to hunger as well as helping to increase children’s focus on their studies and their attendance at school. This is important because food insecurity has long-term health damaging consequences for children, including negatively affecting their cognitive and behavioral development, academic achievement, and physical and emotional wellbeing.

The reduction in food insecurity in America in 2015 underscores the importance of a “health in all policies” approach to this public health problem. For example, recent initiatives, such as the Affordable Care Act (ACA) of 2010 that expanded Medicaid in many states and reduced the number of uninsured to 9.1% in 2015, have resulted in lower out-of-pocket medical expenses for many low-income Americans. Studies have shown that people experiencing food insecurity often have to choose between paying for food and their medical needs. As a result of the ACA, an increased number of low-income Americans may have more money to spend on food. Although originally established to increase access to quality health care for Americans, the ACA and Medicaid expansion have paid a dual dividend by also providing Americans living in poverty with more income and resources to reduce household food insecurity.

While the increase in food security for American households over the past year is very encouraging, it is still not as low as the 11.1 percent rate of 2007 before the Great Recession occurred. Additionally, in 2015, as many as1 in 7 Americans still did not have enough food to eat.

Effectively addressing food insecurity requires a multi-sector strategy that mobilizes government, NGOs and private sector stakeholders. The SNAP to Health initiativeis an example of a successful program aimed at reducing food insecurity rates and promoting healthy nutrition for low income Americans. It highlights the barriers, best practices, policies, and innovative strategies for improving the health and nutrition of SNAP participants. Adequate and nutritious food is essential for a healthy, productive life. To ensure the health and well being of all Americans, hunger in the United States must end. To achieve this goal, all sectors of society must work together so that someday “hunger in America” are words found only in the history books.

Rear Admiral Susan Blumenthal, M.D., M.P.A. (ret.) is the Public Health Editor of The Huffington Post. She is a Clinical Professor at Tufts and Georgetown University Schools of Medicine and a Senior Fellow in Health Policy at New America where she directs the SNAP to Health initiative that focuses on strengthening nutrition in Federal food assistance programs. Dr. Blumenthal served for more than 20 years in senior health leadership positions in the federal government in the Administrations of four U.S. presidents including as Assistant Surgeon General of the United States, the first Deputy Assistant Secretary of Women’s Health, and as Senior Global Health Advisor in the U.S. Department of Health and Human Services. She also served as a White House advisor on health. Prior to these positions, Dr. Blumenthal was Chief of the Behavioral Medicine and Basic Prevention Research Branch, Head of the Suicide Research Unit, and Chair of the Health and Behavior Coordinating Committee at the National Institutes of Health. She has chaired many national and global commissions and conferences and is the author of many scientific publications. Admiral Blumenthal has received numerous awards including honorary doctorates and has been decorated with the highest medals of the U.S. Public Health Service for her pioneering leadership and significant contributions to advancing health in the United States and worldwide. Named by the New York Times, the National Library of Medicine and the Medical Herald as one of the most influential women in medicine, Dr. Blumenthal was named the Health Leader of the Year by the Commissioned Officers Association and as a Rock Star of Science by the Geoffrey Beene Foundation.

Mariana Zindel Mundet Cruz is a Health Policy Intern at New America in Washington D.C. She is a graduate of Duke University where she majored in Global Health and Cultural Anthropology. Zindel has previously interned at the National Academy of Medicine, Gavi, The Vaccine Alliance, and the Partnership for Appalachian Girl’s Education. She has worked on global health issues including mental health, social justice and health equity, child development, poverty reduction, food security, and women’s health. Zindel contributed to the development of an impact evaluation for a mental health intervention in Kenya, conducted research on innovative technologies to reduce stress in people with mental illnesses, and investigated the psychological effects of bullying. She has made child and maternal health, health equity, and human rights a key focus of her work.