Healthy Eating Can Cost Less According to USDA Study 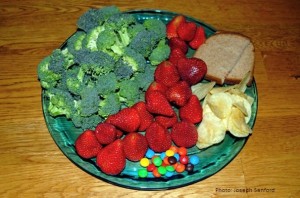 Are healthy foods really more expensive? That is a key question as well as the title of a recent U.S. Department of Agriculture report. High cost is often mentioned as a barrier to eating healthy foods like fruit and vegetables. There is a common perception that healthy foods cost less than less healthy foods. Previous research, for example from Drewnowski and colleagues (2010), which looks primarily at price per calorie, has supported this idea. However, the USDA researchers found that healthy food is actually cheaper when they used two other metrics to examine food costs in addition to price per calorie.

The researchers looked at 4,439 foods and estimated the cost by price per calorie, price per edible weight (ex. excluding inedible parts like chicken bones and watermelon rinds), and price per average portion size. They then used these metrics to compare costs for fruits, vegetables and other healthy foods compared to less healthy ‘moderation foods’ which are higher in sugar, fat and salt. When using the price per calorie metric the less healthy foods were cheaper. On the other hand, when using price per edible weight or average portion size, fruit and vegetables were cheaper than most dairy, protein and moderation foods. The photo above shows the different portion sizes for 100 calories of broccoli, strawberries, M&Ms, potato chips and bread.

One example is to compare a glazed doughnut, with about 240 calories, to a banana, with about 105 calories. If both foods cost the same amount, using the price per calorie metric, the doughnut would be cheaper. However, if you pick the banana you’ll probably only eat one and feel a lot fuller afterward, according to Andrea Carlson, lead author of the USDA study. One banana has three grams of fiber, as well as potassium, vitamin C, and B vitamins.

“Many have raised concerns that those of modest means… can’t afford a healthy diet,” said Kevin Concannon, USDA under secretary for food, nutrition and consumer services. “The good news I take away from the study is that is not necessarily the case.”

Although this study found that healthy foods can be less expensive there are other barriers such as access to healthy foods which can be challenging in some areas that lack supermarkets. Access to affordable healthy food has also been part of the discussion surrounding the obesity epidemic with two-thirds of adults and one-third of children overweight or obese in the United States. The Weight of the Nation conference, report and HBO series have brought more attention to this issue recently.

For tips for eating healthy on a budget, visit: ChooseMyPlate.gov, and Shopping on a Budget at SNAPtoHealth.org.