SNAP to Health Interviews Robin Eggers on Garden on the Go 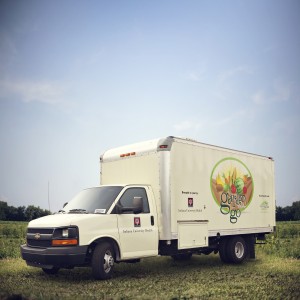 Robin Eggers is the Director for Community Outreach and Engagement for Indiana University Health which operates Garden on the Go, a program serving Marion County.

Recently, SNAP to Health asked her to share more information about this mobile produce truck initiative, how people can take advantage of the program, and what plans there are for the future.

What is Garden on the Go?

Garden on the Go is a mobile produce truck created by Indiana University Health that brings healthy, affordable fruits and vegetables to low-income Indianapolis neighborhoods. Many of our 16 weekly stops – we visit the same sites at the same times each week, year-round – are in what some would call a “food desert,” or places without access to fresh, healthy foods. The goal of Garden on the Go is to fight obesity and diabetes by improving access to these healthy foods in areas that are traditionally underserved or places where residents rely on convenience stores and fast food restaurants.

How does it work?

During the warm-weather months, shoppers come aboard the truck to pick up everything from avocados to zucchini. During the winter months, we bring the produce bins inside buildings at each of our stops, which are strategically located chiefly at apartment complexes or community centers. Many of our shoppers are elderly or have physical disabilities which limit their mobility. That’s why we move the stops indoors during the wintertime.

Shoppers can pay with cash, credit, debit or food stamps (SNAP/EBT). In fact, a recent survey of Garden on the Go shoppers found nearly 20 percent of those surveyed use food stamps. We feel it’s important to accept food stamps because many of those in the areas we serve rely on them to buy their groceries.

When and where are the Garden on the Go sites located?

There are 16 Garden on the Go stops, but we started with 12. All the stops are positioned strategically at neighborhood centers, libraries or apartment buildings, the latter of which includes many senior and public housing communities. Each stop is located in Indianapolis in areas IU Health has identified as being a “food desert.” A full listing of stops and locations is available on our website at iuhealth.org/gardenonthego.

Where does the produce come from and what type of variety is offered?

In an effort to keep costs as affordable for the shopper as possible, the produce is largely conventional and comes from a variety of sources, locally, regionally and nationally. Green B.E.A.N. sources the produce for the program. We offer approximately 30 varieties of fruits and vegetables based on what’s in season.

What is the overall goal of this program?

The overall goal of Garden on the Go is to introduce healthy foods to communities that don’t have access to fresh, affordable fruits and vegetables. Indiana University Health is acutely aware of the impact of obesity and diabetes in our communities, so Garden on the Go focuses on helping community members with more nutritious food options. We have heard numerous stories of how the increase in produce consumption has improved our shoppers’ health. To further explore the health impact, we’re working with the Indiana University School of Medicine’s Department of Public Health to track the health of 100 shoppers over the next six months in an effort to secure some quantitative data on the program’s success.

Since first beginning in May 2011, what growth in participation has been seen?

Garden on the Go has been embraced by the communities which it serves. We started with 12 stops in May 2011 and by the fall expanded to 16 stops. We completed 10,000 sales transactions in just 9 months, making Garden on the Go one of the fastest-growing mobile produce trucks in the nation. We’re now poised to launch a research project tracking shoppers’ health, which is made feasible thanks to the buy-in from our loyal customer base. As of mid-March 2012, the program has had over 12,000 transactions (and a record-setting 423 transactions last week alone).

Are there any discounts or promotions at this time, or possibly in the future?

Garden on the Go currently offers a “Frequent Shopper card” where, after 10 purchases of $5 or more, shoppers can get $5 off their next purchase. This is in addition to the already low prices we offer on fruits and vegetables. For example, $7 can buy 1 pound of green beans, 1 head of lettuce, 2 pounds of potatoes, 1 pound of tomatoes, 2 apples and a pound of bananas – that’s a lot of healthy foods for not that much money!

How does the program measure success?

We measure success in several ways. First, we track how many sales by day, week and stop. This helps us adjust our route, if necessary, to ensure we’re utilizing the truck in the most efficient manner. Second, we hear anecdotally about drastic decreases in blood sugar levels or weight loss from long-time shoppers. Lastly, we’re working with the Indiana University School of Medicine’s Department of Public Health to track the health of 100 shoppers over the next six months in an effort to secure some quantitative data on the truck’s success. We’re also launching a small pilot study with two local clinics to measure some of the same health information, such as body mass index, weight and A1C (blood sugar) levels.

What methods are used to promote its services in the community?

Garden on the Go is a largely grassroots effort, led by our outstanding community outreach team which has connected with community leaders to help spread the word. We’ve worked with the Mayor’s Neighborhood Liaisons, a group of well-connected advocates; managers of public and senior housing buildings in Indianapolis; and have also distributed fliers to local businesses and gathering spots. The local media has also been supportive and covered Garden on the Go in the Indianapolis Star, the Indianapolis Business Journal, and numerous other media outlets.

How often do people visit Garden on the Go? Have you noticed repeat customers?

Many of our shoppers are regulars and have been coming to the truck since it first started visiting their respective stops. It’s encouraging to see so many familiar and friendly faces week after week; Garden on the Go wouldn’t be possible without them!

Do you partner with nutrition education programs?

While Garden on the Go is breaking down food access barriers – or “food deserts” – one stop at a time, IU Health also understands shoppers need to understand how to prepare and incorporate fruits and vegetables into their lives. Education around how to prepare healthy meals is a crucial component of Garden on the Go’s mission and is why the truck will be featuring recipe samplings, free recipe cards and other events throughout 2012. For the recipe samplings, we’re partnering with Purdue University Extension and Ivy Tech College of Culinary Arts and have started visiting stops this month. IU Health dietitians have also begun visiting our stops, engaging with customers, and helping to answer their questions about produce.

Have other cities or areas expressed interest in starting something similar?

When starting up Garden on the Go, we researched a program in Albany, New York called The Veggie Mobile. It is funded in part through a 5-year grant from the New York State Department of Health. Aside from that program, we are unaware of similar programs. We have had several inquiries about the program since it’s unique for a healthcare system to focus on access to fruits and vegetables.

Where is the program headed? Are there plans to scale up beyond Marion County?

We are evaluating the adding of another day of the week to the schedule. The short-term plan is to remain in Marion County, but longer term options will analyze routes in other food deserts in central Indiana. Through another project, Indy Urban Acres (a partnership between Indy Parks, the Indianapolis Parks Foundation, IU Health and the food bank Gleaners), fresh produce is grown and harvested on an urban organic farm and picked up by Gleaners each week. Those vegetables are then distributed through the Gleaners network to have a broader reach than the current route for Garden on the Go.